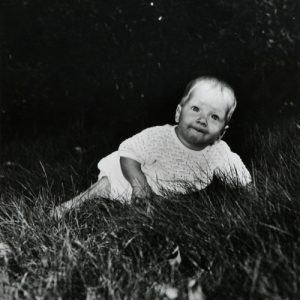 Sam at 6 month, by Diane Arbus

In recent years Sam’s art has been featured in two group shows, both organised by the curator Flora Fairbairn, noted for her interest in discovering new talent. There have also been sales to some serious collectors and a feature in a book about 21st century collage – Cut and paste, from Lawrence King publishing. More recently Sam has had solo shows at the Subway gallery and the Lotus Foundation gallery in London and also is a founding member of the Queens Park Artists group

Sam Chamberlain was born in New York City, son of Wynn and Sally Chamberlain, and twin brother of Sara Chamberlain. In 1970 the Chamberlains left New York and spent the next 5 years traveling in India.

In 1975 the family returned to America and built a house in the California wilderness. In 1983 they returned to India where Sam and his sister attended Woodstock International School in Mussoorie.

Returning to America once again in 1986, Sam attended Middlebury College in Vermont where he majored in fine arts and history and spent his junior year abroad at Worcester College, Oxford. After graduating he worked as an intern for the artist Francesco Clemente, for his book company Hanuman books, and as a care person for Andy Warhol’s assistant Fred Hughes. During these years he continued to make art.

In 1997 following a serious accident, Sam was transferred to a clinic in Oxford for rehab and to be near his family during his convalescence. During this period he managed to complete a master’s degree in Computer Science from the the University of London.

Living in Oxford, then in London, he has continued to produce art

“Sam Chamberlain was born in March 1968, and I was with him at Woodstock Festival in August 1969. The colors and primal duality of his paintings are a splendid play of mind”